The Fire Ceremony
Upon moving to a rural country setting three years ago, I felt compelled to build an open face pagan style fireplace in our backyard. Ryan and I worked together on carrying stones uphill from the brook. Incidentally, the created stone shape is triangular and points due east. For reasons I can’t express it seemed important to have our first ceremonial burn with entirely local ingredients. We burned limbs gathered from three amazingly beautiful and protective mountain ash trees. Mesmerized by what we were seeing and experiencing that night, I realized that this would be the place to capture fire. Months later, my beekeeper friend gave me a stack of darkly colored spent honeybee frames. He told me that due to the wax and residual honey sugar, the frames would create an intensely beautiful and warming light when burned. Not thinking too much about it, I tucked them away under cover with the rest of my campfire collection. One night, naively underestimating their power; we threw several frames in the fire at once. In less than a minute’s time, the flames became furious and explosive. We became instantly frightened and quickly backed away from the fire stumbling over our chairs. The flames got so high we thought the trees would catch and I feared that we would be responsible for something unfathomable. During our amazement and fright, there was a long suspended almost silent moment where we noticed strange shapes and brilliant bodies layered within the flames. It was as if something was showing itself to us.

Fascinated yet intimidated, I decided to study this fiery experience for a couple of years prior to photographing it. Early this spring, Ryan stacked the frames as I laid close on the ground trying to catch every second of the ceremonial fire. The flames rose high and bright like an intense ethereal beacon. The whole forest fell witness to the awakening flame. 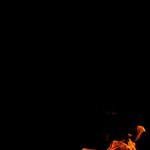 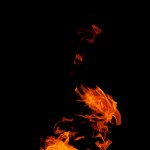 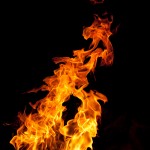 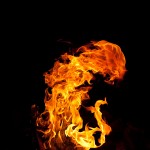 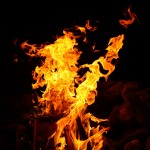 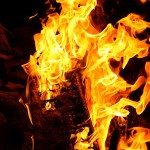 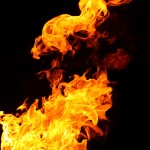 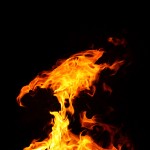 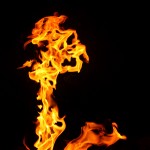 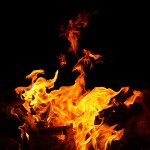